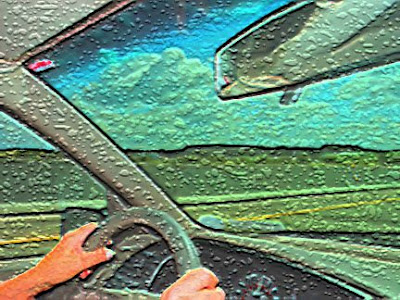 You sure the air conditioner’s working? It’s awfully hot in here, and I’ve got the knob turned full blast. It must be at least 100 degrees outside. I’m sweating like a pig.

Whoops. My purse was blocking the vent. That’s better now.

Smells funny in here. What IS that, anyway? I swear, we have a phantom who plants bad onions in here.

You leave any food out? It’s a mess in here, but I can’t seem to find any old food.

Monroeville. Is that all the farther we are? Doug and I drove here once. He wanted to see Tyrone, a really cool kid who was still in high school. I was about two months pregnant with Nicole and living in Pennsylvania just a few weeks. I was horribly depressed because, deep down, I knew I was knocked up, and Doug already had one foot out the door. And Tyrone was a really foxy guy, tall with red hair and green eyes. The funny thing is, Tyrone’s holy-roller mother hated Doug–hated all hippies, actually–but, for some unfathomable reason, decided my soul was worth saving.

That night, Doug and I fucked out in her backyard, but I really wanted to roll around in the weeds with Tyrone.

For the rest of the visit, I found it more and more difficult to ignore Tyrone’s mother.

Finally, I just got sick of her tirade, so I said, “Look, lady. I wanna fuck your son.” That shut her up, but it was also the truth. I really wanted that guy in the worst way, but it never happened.

We could always stop and look him up....

About another hour, and we’ll be in Ohio.

I’m always falling in love with the wrong men. It seems like I always want what I can’t have.

Like Ian. I know I’ll never really have him.


I was six when it first happened. We’d just moved to Yuma from Santa Barbara. Mother and Daddy Platts seemed to move around a lot in those days, but here we stayed almost a whole school year. I know we spent Christmas and Easter in Yuma, but I had started school in Santa Barbara. We were there, now let’s see, through Halloween. So we must have moved to Yuma sometime around Thanksgiving.

Jackie wasn’t exactly a boyfriend–he lived down the street with his parents and older brother, and we went to O.C. Johnson Elementary School together, where I learned to read The Jungle Book in one day. We were both in first grade.

I’ll never forget the first time Jackie and I met. It was the day Daddy, Mother, Ruby, and I were moving into the neighborhood. My parents were busy lugging our furniture and clothes into the house.

I was unhappy because I had no friends yet and mad because I hadn’t wanted to move in the first place. I was bouncing a rubber ball off the tar paper shingles and muttering “life’s so unfair” when Jackie showed up and stood on the sidewalk watching. Eventually, he sauntered into the yard and shyly offered his hand. No boy had ever offered his hand to me before; I just stood there mute, hands by my side. He gently took my left hand and examined it. He said, “I’m Jackie.” Then he held his palm against mine. “Your fingers are longer than mine.”

It was then I noticed that he had no thumbs, just four fingers on each hand.

“So what happened to your thumbs?” I blurted out.

He shrugged, and said, “I was born this way. But it don’t really matter.”

And we never spoke of it again. Still, when Jackie wasn’t around, I would fold and squeeze my thumbs into my palms so that I couldn’t see them and pretend I had no thumbs either.

Other than that, Jackie seemed normal enough to me: he had a black buzz haircut and liked to play family–husband, wife, and baby. 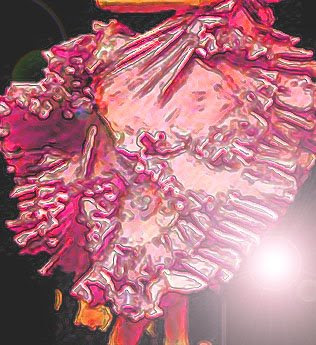 He always wanted to be the wife, dressing up in my mother’s silk slips, blouses, long skirts, and high heels. I can still see him modeling in one of my mother’s outfits, just like a model, jutting his hipbone out, walking down a runway, Mother’s skirt swishing back and forth.

It was the only time during my childhood when all my dolls had shiny, curly hair–styled just so–because Jackie was forever styling with their hair–hairpins all over my bedroom. Even without thumbs, Jackie was good at fixing hair, always brushing mine with Mother’s black bristle brush. Once, to Mother’s horror, he styled my hair, piling it on top of my head in loose, frivolous curls. I felt funny in such a fancy ‘do and combed it out as soon as he went home.

I didn’t mind playing the husband because I could play construction worker on the real site across the street and stack bricks in the sand; in those days, everything in Yuma was about sand–maybe it’s different now. When I returned from “work,” Jackie would have straightened up my room and organized my dolls in a line against the wall, my hairpins stacked on the dresser.

Once, when I came “home,” Jackie had stuffed a towel under his blouse. “I’m pregnant, honey,” he said in a sing-song voice.

“Well,” I said in the deepest, gruff voice I could muster, “I’ll ask my boss for a raise.”

He told me a secret and made me swear I wouldn’t tell a soul: “When I grow up, I’m going to let my hair grow and dye it red so it looks just like yours.”

“But your hair’s straight.”

“Then I’ll go to the beauty shop and get a permanent wave.”

I had never heard of a boy getting a perm.

But I didn’t think too much of it. I just liked Jackie because we played together well–he let me boss him around like a real husband–and when we snuggled together on my bed, I got to get on top.

Another time, he told me he was going to have an operation to become a girl.

I just laughed. “Boys can’t be girls, dontcha know that?”

But Jackie never got the chance: one day, he was rushed to the hospital with appendicitis and never came back.

After the funeral, Mother said, “It’s just as well, honey. He was a junior drag queen.”

I never told anyone about the girl operation.

Labels: B. Part I: Journeys (Chapter 6), Chapters, Journeys, Part I