Sheldon Weiss, I don’t want to talk about Nicole. It’s too stressful, and this car’s too small for this discussion. I didn’t tell her to join that cult. That child’s incorrigible, a real pain in the ass. She didn’t ask my opinion, and even if she did, she wouldn’t listen to me, anyway.

At her age, I wouldn’t have listened either.

I hate this part of the trip. I hate winding around on this turnpike, I feel half sick all the time, and my ears pop. Maybe I just hate Pennsylvania. 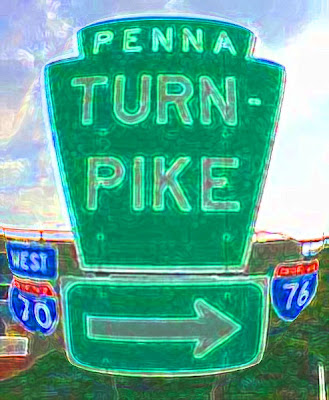 Good ‘ole Breezewood. Look at that billboard. “City of Motels.” Tacky motels, I’m sure. When my Pappa died, I traveled by bus to Sioux City for the funeral. The bus stopped here at a humongous cafeteria, where they served greasy vegetable soup and stale bread. I don’t know why I’d remember that detail, except that I was very thin and sad then, and nothing looked good.

I bet Breezewood’s a great place to have an affair–maybe we could stop and knock a quick one off at one of those places with mirrors and water beds? Oh, there’s the exit. We could just–

Oh, never mind, I know we’re on a tight schedule. Our lives seem to be all about rushing around. Who has time to think about sleazy motels?

I know Roger’s too old for Nicole. God, he’s older than I am. Pond scum. A real snake.

Jesus. And he even looks older than 45, but that’s beside the point. If only he’d bathe once in a while. I can tolerate a lot, but not men who don’t wash. Nicole says it’s against God’s wishes, that God loves their natural body odor.

I don’t see how Nikki stands him. But she’s old enough to take her bumps. “Responsible for her own actions” as your hero Fritz Perls would say if he were still alive and dispensing psycho-babble from a hot tub.

Okay, okay, I’ll stop with the snide comments. You have your opinion, I have mine.

Still, that pregnancy doesn’t thrill me a whole lot.

I know Roger treats her like shit; he has other women on the side, and she has other men. Nikki told me so. It doesn’t matter WHEN she told me, just that she’s told me. She says having sex with the others in the cult is a rule. That everyone has to love everyone else.

I must admit, even I’m shocked, and I thought I’d seen and done everything, but this is beyond anything I could ever imagine. I don’t know why she tells me these things. I don’t remember going out of my way to tell Nana about my sex life. God forbid.

At least when I screwed around, I wasn’t doing it in the name of God.

I didn’t even BELIEVE in God.

Nikki says I must be getting old. Can you imagine? OLD!!! Just because I can’t understand their fascination with group sex.

Still, if she can live with it, then so can I. It’s like Nana always says about Mother, “I had to put her shenanigans outta my mind, or I’da gone crazy.” Still, if Nikki doesn’t get some strange disease–

I don’t believe in abortion–and I’m not getting into that discussion with you right now–but I’m wondering if it wouldn’t be best for Nikki, especially if the kid’s going to be born sick anyway....

Anyway, it’s not my decision.

I know you’re concerned about her, but you’re not her dad, and she’s not going to listen to you. Especially you.

I wish Doug would talk to her. She won’t listen to me, but she might listen to her dad. I can’t imagine what he’s thinking about, lending ROGER money to buy a motorcycle. Can you imagine? A pregnant girlfriend, and HE’S out buying motorcycles and beer and dope while Nikki sits at that compound with other pregnant women, puking in the toilet.

Roger’s the most disgusting human being I’ve ever met, I just don’t know what Nikki sees in him. I swear, he smells like grease and stale cigarettes. Nikki’s too young and pretty to be stuck with an old man with a beer gut and a gray beard. I mean, I don’t want you to think I’m prejudiced against someone just because he’s old enough to be Nikki’s father and works with his hands–God knows I work with mine–but I just think old men who chase after young girls like my Nikki have got to have a screw loose somewhere. Don’t you agree?

Well, it doesn’t matter what we think.

Maybe if I’d been a better mother. God knows I tried, but, somehow, I just kept missing opportunities to develop a real rapport with Nikki. I guess some people aren’t meant to be parents, and I’m one of them.

It’s true, Shel. I was a lousy mother.

I didn’t even go to the doctor until I was seven months along. Did I ever tell you that? I guess I felt that if I didn’t acknowledge my condition, it would just go away on its own–maybe the child would wither and die in my womb.

Or find another mother.

And when I could no longer ignore my ballooning belly, I would pat it and say, “You poor little sucker, what have you gotten yourself into?”

Then when the doctor confirmed my condition (as if there were any doubt by then), I thought, “Doug’ll have to marry me now.” Can you believe that? Not “Oh-my-God-you’re-knocked-up; what-have-you-gotten-yourself-into-for-the-next-18-or-21-years-of-your-life?”

I had to find out the hard way that getting pregnant does not necessarily mean getting married for the long haul. I wanted to get married so badly, but Doug kept dodging the issue. Said he wanted to wait until after the baby was born.

I told him that’s what I wanted too.

Did you know that during my pregnancy Doug had another girlfriend? She lived in Cherry Hill, came from a nice Jewish family. He said she was just a friend. Made a big deal of her being a virgin.

I think Dougie boy was just hedging his bets, just in case I had a miscarriage or decided to have an abortion, after all.

I think he should have dumped me and married his Jewish princess because that’s what he really wanted to do. What else could I expect from a guy I picked up in Hollywood, in front of Wallich’s Music City yet?

By the time we DID get married, I already knew it was a big mistake....

I just know Nana’s going to wonder why Nikki’s not coming to the reunion.

God, she must never find out about what’s going on. I want Nana’s last days to be peaceful, not full of Nikki’s bullshit.

I told Nik that under no circumstances was she to show up at the reunion. She knows I’ll disown her if she does. And I will, you know.

I’ll think up some lie to tell Nana, like maybe Nikki had to work and her boss wouldn’t give her time off? HA! As if Nikki’s ever held a real job.

You’ve got to promise me you won’t tell anyone in the family, not even Sal, about Nikki’s situation.

Labels: B. Part I: Journeys (Chapter 5), Chapters, Journeys, Part I