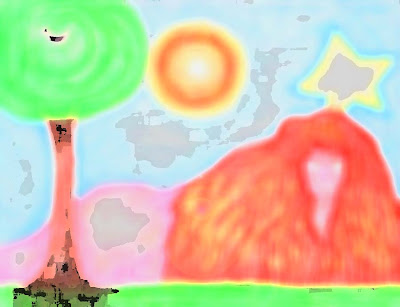 Gargantua Goes on a Diet 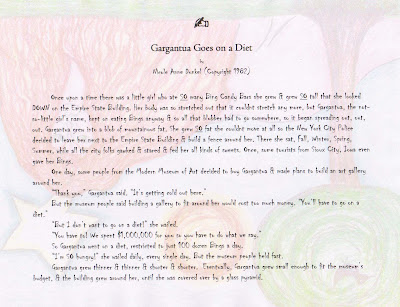 Once upon a time there was a little girl who ate SO many Bing Candy Bars she grew & grew SO tall that she looked DOWN on the Empire State Building. Her body was so stretched out that it couldnt stretch any more, but Gargantua, the not-so-little girl’s name, kept on eating Bings anyway & so all that blubber had to go somewhere, so it began spreading out, out, out. Gargantua grew into a blob of mountainous fat. She grew SO fat she couldnt move at all so the New York City Police decided to leave her next to the Empire State Building & build a fence around her. There she sat, Fall, Winter, Spring, Summer, while all the city folks gawked & stared & fed her all kinds of sweets. Once, some tourists from Sioux City, Iowa even gave her Bings.

One day, some people from the Modern Museum of Art decided to buy Gargantua & made plans to build an art gallery around her.

“Thank you,” Gargantua said. “It’s getting cold out here.”

But the museum people said building a gallery to fit around her would cost too much money. “You’ll have to go on a diet.”

So Gargantua went on a diet, restricted to just 100 dozen Twin Bings a day. 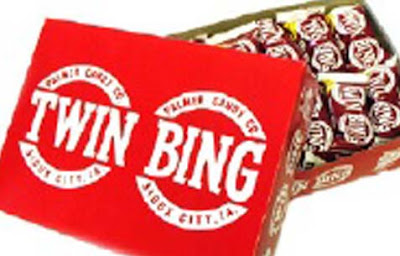 “I’m SO hungry!” she wailed daily, every single day. But the museum people held fast.

Eventually, Gargantua grew small enough to fit the museum’s budget, & the building grew around her, until she was covered over by a glass pyramid. 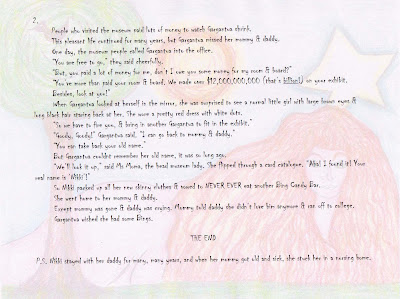 People who visited the museum paid lots of money to watch Gargantua shrink.

This pleasant life continued for many years, but Gargantua missed her mommy & daddy.

One day, the museum people called Gargantua into the office.

“You are free to go,” they said cheerfully.

Besides, look at you!”

When Gargantua looked at herself in the mirror, she was surprised to see a normal little girl with large brown eyes & long black hair staring back at her. She wore a pretty red dress with white dots.

“So we have to fire you, & bring in another Gargantua to fit in the exhibit.”

“You can take back your old name.”

But Gargantua couldnt remember her old name, it was so long ago.

“We’ll look it up,” said Ms Moma, the head museum lady. She flipped through a card catalogue.

So Nikki packed up all her new skinny clothes & vowed to NEVER EVER eat another Bing Candy Bar.

She went home to her mommy & daddy.

Except mommy was gone & daddy was crying. Mommy told daddy she didn’t love him anymore & ran off to college.

Gargantua wished she had some Bings.

P.S. Nikki stayed with her daddy for many, many years, and when her mommy got old and sick, she stuck her in a nursing home. 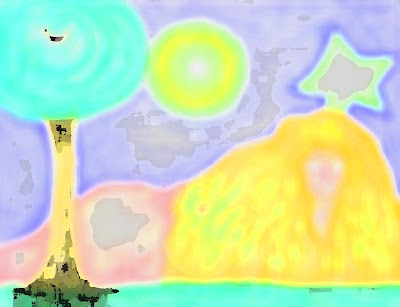