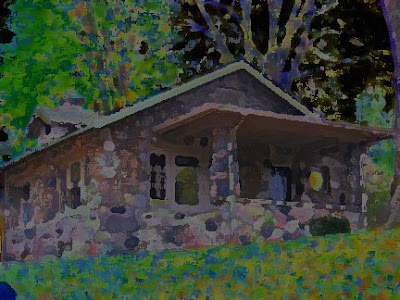 Sheldon parks the car in front of the small rock house, just outside Timber City, Arkansas. There are no other houses in sight. The sun has just set, and the peepers and katydids are trying to out chirp each other. A tension–-maybe static–seems to crackle around us. Sheet lightning in the distance. It is a hot night, the humidity hanging in the air like a damp towel. I had heard about the humidity in these parts, how it seems to cling to you like a whiny kid, but I never realized how it could sit on you and make you want to beg for relief. Half moons of sweat drip under my armpits, and my skin feels hot and scratchy and raw. Later, I’ll find out about the chiggers, how they get on your skin and stick to you until they get what they need.

My sister’s thin silhouette poses in the doorway, long cigarette in hand. 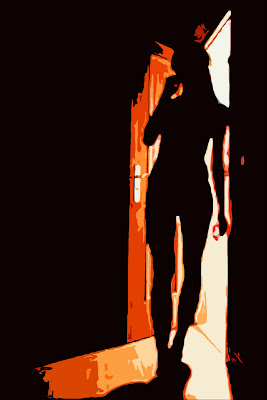 My stomach suddenly aches; I don’t want her to see me like this, fat and bloated. I want to be thin like her, thin like the rest of the world. Why, for our first meeting, does she have to see me like this? Why couldn’t I lose this weight, at least for this first time? Why can’t I have willpower like other people?

I feel trapped in this body, a body I had never asked for or wanted. I’m a prisoner of my biology.

I want to jump into the car and go back to Pennsylvania. Instead, Sheldon takes my hand and leads me toward the house.

As we walk through the yard, I begin to see Ruby’s features better, her short auburn hair, high cheekbones, blue eyes. She wears a Razorback tee-shirt, faded baggy jeans, and sandals.

“Come in,” Ruby says in a southern drawl. She takes a deep drag from her cigarette, a Virginia Slims 100, and blows the smoke toward the ceiling. 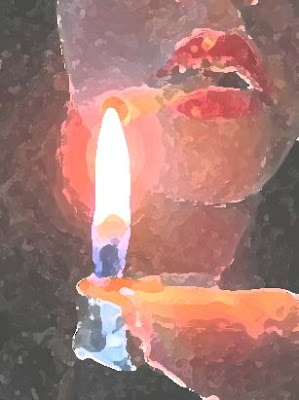 Sheldon gives me “that” look when he sees the cigarette dangling from Ruby’s fingers. I want to tell him that I had no idea about the smoking. How was I supposed to know, anyway?

A man, also with a cigarette in his hand, and two kids come into the living room.

“This here’s Raymond, Tessie, and the baby, Stevie.”

Raymond nods to me; he looks just like his photograph–longish brown hair, sharp blue eyes (perhaps a bit on the sardonic side), lopsided grin– except now, he’s in his work clothes, a green mechanic’s jump suit with “Ray” embossed on the pocket. In the picture I have at home, he and Ruby are dressed up in Sunday clothes, he in a striped Qiana shirt and she in a red sweater.

The little girl peeks from behind her father; she looks just like her mother’s First Communion photograph.

“They’ll come around,” Ruby says, steering us toward the dining room table. We all sit down and stare across the table at each other.

I don’t know these people!

Ruby lights another cigarette. “I’ve got an idea,” she says, “let’s play some cards. You know Gin Rummy?” 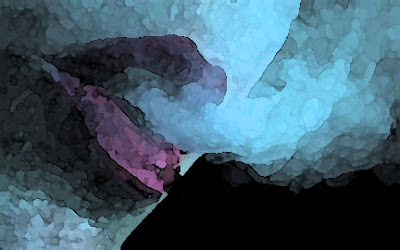 “Yeah,” I say. I figure it’s better than staring at each other, groping for something to say. Besides, you get to know people pretty fast when you play cards with them. Auntie had taught me that.

While Ruby pours sodas all around–she doesn’t offer anything alcoholic–-I begin the deal.

By the third or fourth hand, I have discovered that Ruby and Ray are casual players, which is a relief. They slap cards down willy-nilly and don’t pay attention to what has been played, laughing when someone, mostly Shel, “rums” them. I’m glad, because serious players can be a bore, taking just about everything in life, including themselves, a bit too seriously. 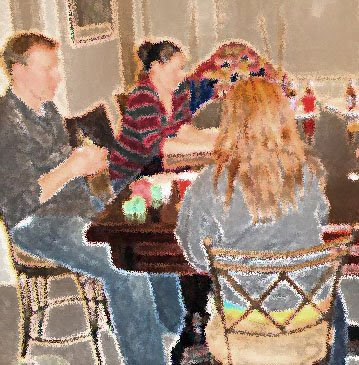 Shel is one of those people; he plays cut-throat Rummy, swooping up piles of cards and imperiously slapping down books and runs. He gloats when he wins and sulks when he loses.

Soon, Ruby and Ray grow bored, and we stop playing.

I begin talking about our life together, those few months long, long ago. Ruby, of course, doesn’t remember anything from those days, and I keep thinking how silly I must sound going on and on about baby stuff, a one-way memoir about a time and people alien to my captive listeners.

Even when Ruby yawns, I can’t seem to stop talking, I’m trapped in this loop, and my mouth won’t stop, I just need to talk through those times and hope that a hint of recognition passes on Ruby’s face.

The truth of the matter, I can’t relate to this grown-up Ruby, I just want to go back and start over, find my little sister again, make my Nana and Pappa listen to me, and if that doesn’t work--

We’ll just run away from L.A. and hitch a train to Sioux City, like old bums... 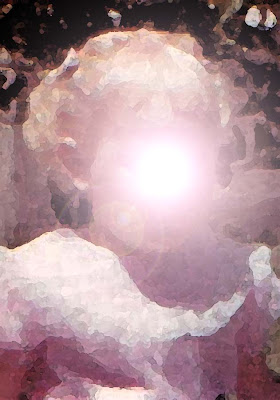 -–There’s no place in Ruby’s life for me anymore.

In stages, the kids do come closer: first, Tessie peeks out from behind her father, and then hides again. Stevie mimics his big sister. Soon, both kids are sitting at my feet, staring up at me. Tessie even touches my pant leg and then tugs at my jeans. She giggles when I ruffle her strawberry hair.

“They don’t see too many strangers,” Ruby says, flicking an ash into a crystal ashtray.

For a second, I see echoes of Mother, the languor, even the drawl. Mother slurred her words when she was drunk, and I just hope Ruby hasn’t inherited the family problem. But, so far, I’ve seen no evidence of empty beer cans, no Hamms in the refrigerator, no hard liquor bottles in plain view.

Sheldon clears his throat and coughs a little.

I tap his shin under the table.

Now I kick him hard. “Sheldon!”

Ray follows suit. Both swat at the air.

“Wouldn’t want y’all to get sick,” she says, getting up to empty the ashtray.

“I get very ill when I inhale the stuff. Can’t breathe.”
“Never knew anyone like that,” Ray says.

“You Yankees sure do have some strange ailments.”

I can almost see Ruby kicking her husband under the table.

“It’s okay. But you know, some people are even allergic to perfume,” Shel says. “So I have a ‘no smoking’ and ‘no perfume’ practice. It’s the new thing now in therapy. Specializing. Clients know what to expect right from the start, and I don’t have to breathe pollutants.”

I want him to stop this right now, I don’t want my sister mad at me for such silliness, so I kick him again. 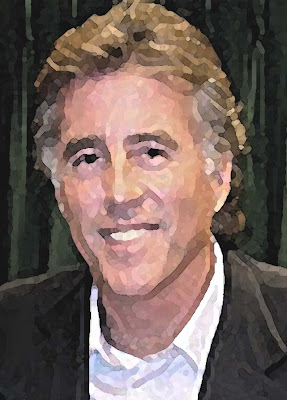 Shel sits up straight, but he can’t seem to stop once he’s gotten going: “Just means one less confrontation in therapy. Not that all confrontation’s all bad, it’s part of the Gestalt approach, but it’s got to be an important confrontation, not a silly one about smoking or perfume.”

“Mind you, I’m not allergic to perfume–-in fact, I rather like it–-”

Ray nods, gets up from the table, and rubs his stomach. “Well, I’m goin’ t’bed. Gotta get up early. Need help with your suitcases?”

“That would be nice,” Shel says.

We all troop out to the car to get some of the luggage. Then Ruby shows us our bedroom, a small room in the attic. The bed, covered with a homemade quilt, looks a little lumpy, but since we’re staying only three days....

Shel yawns and says he’s going to bed too.

Ruby and I go downstairs, where we sit up all night talking, drinking Cokes.

I tell more stories about our short time together, my sister nodding politely.
Posted by Jennifer at 6:08 PM

Labels: B. Part I: Journeys (Chapter 23), Chapters, Journeys, Part I